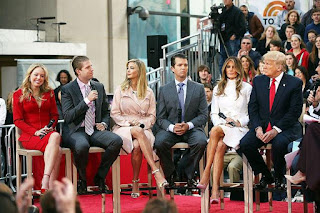 With Donald Trump as the official nominee for the Republican Party, his kids have been seeing a lot of the limelight as well. Trump has five children, Ivanka, Tiffany, Eric, Donald Jr., and Barron. Despite the negative portrayal of Trump in the media, his kids actually think he’s an incredible dad.
There’s much more to this family than what meets the eye. Here are 10 things you should know about Trump’s kids that you probably, well, don’t.

Ivanka launched a successful clothing line in 2011, featuring pieces like dresses, eyewear, bags, and shoes, tailored to businesswomen like herself. Her clothing is generally affordable, and sold in stores like Macy’s, Nordstrom Rack, and Lord & Taylor. According to InStyle magazine, Trump’s line “includes casual day and work-friendly looks like scarf-print blouses, ponte knit capri pants, soft cardigans and patterned skirts, plus a few night-on-the-town options like lace cocktail dresses—all for under $200.” Her line is made up of very classy, timeless designs.

2. She is the woman behind #womenwhowork.

If you visit Ivanka Trump’s site, you’ll see that it gears towards the business and young professional woman, with articles on topics such as style, work, home, play, travel, and advice. She began the hashtag#womenwhowork, which is used to celebrate the modern woman. According to the site, “For the first time in history, [modern women are] able to embrace the fact that our lives are multidimensional. We’re doing work we love, work that inspires us, and we’re also pursuing our passions and making them priorities.” The initiative is meant to inspire women with power interviews on career and style advice for the working woman.

3. Donald Jr. has a thing for hunting.

The Trump boys reportedly went on a kill safari in 2012, and photos have definitely surfaced of Eric holding both an African leopard and a water buffalo. According to NY Daily News, Donald Jr. told Forbes magazine in 2012, “Anyone who thinks hunters are just ‘bloodthirsty morons’ hasn’t looked into hunting,”
He continued, “Nature actually humbles you. Hunting forces a person to endure, to master themselves, even to truly get to know the wild environment.”

Donald Jr. is married to model Vanessa Haydon, and they have three sons and two daughters. The couple got married in November 2005.

5. Tiffany is an Ivy League graduate.

In 2016, Tiffany graduated from University of Pennsylvania, just like her father. According to USA Today, “She double majored in sociology and and urban studies, with a concentration on law.” She posted this sweet photo with her sister Ivanka thanking her family and friends for the support she received through school.

With a whopping 173k followers on Instagram and her role in The Rich Kids of IG, Tiffany has definitely earned her title as being IG famous. Her bright photos and cute outfits up her selfie game, and herUPenn selfie totally takes the cake, for us. Beauty and brains!

7. Eric Trump is big into philanthropy.

In 2013, Eric was named one of the 20 most important young philanthropists by The New York Observer, and founded the Eric Trump Foundation (when he was only 23!). He has raised about $30 million for the St. Jude Children’s Research Hospital in California.

8. His wife is an associate producer for CBS.

Eric is married to Lara Yunaska, the associate producer of Inside Edition on CBS. The couple was together for six years before they got engaged and eventually married at Mar-a-Lago Club in Palm Beach, FL on November 8, 2014.

9. Barron is not raised by nannies.

In an interview with People magazine, Melania and Donald opened up about raising Barron, and how, despite their busy schedules, they try and have the most hands-on parenting approach they can, sans nannies. Trump said, “If you have too much help, you don’t get to know your children.”

10. He has many similarities to his father.