After making us wait for this long, the makers of Thugs Of Hindostan are finally giving a visual treat everyday to the fans by releasing a character poster. Having pulled off an incredible casting coup by bringing together two of the biggest legends of Indian cinema Amitabh Bachchan and Aamir Khan on screen for the first time, this film is the most awaited release this year on Diwali. From last 3 days, we saw the solid posters of Amitabh Bachchan, Fatima Sana Shaikh & Lloyd Owen. Now the fourth poster features the gorgeous Katrina Kaif who will be seen essaying the role of Suraiyya.

Yash Raj Films took to their Twitter account and shared the brand new poster. Have a look: 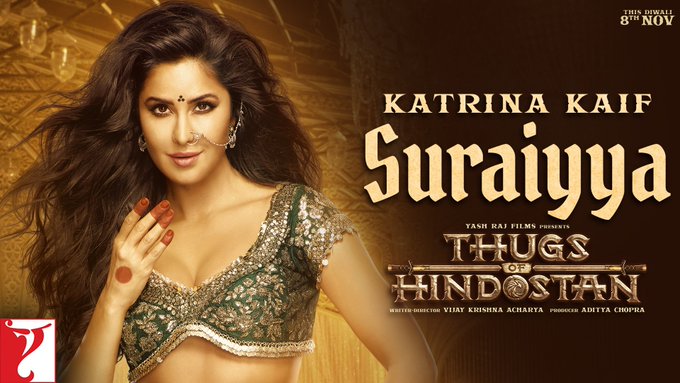 Speaking about the poster, Katrina looks stunning on it. As usual, she has rocked the thug look and is slaying it like a true thug. Just like the previous poster, even this one has an amazing background music which will gives chills down our spines. Well, the posters itself are a proof that this Diwali there will be solid dhamaka for the audiences and on the box office too.

Now we await the look of Aamir Khan which will come out tomorrow. We know how perfectionist Aamir is, so we can only imagine what’s there for us in the box!

YRF’s Thugs of Hindostan is directed by Vijay Krishna Acharya and is set to release on November 8.