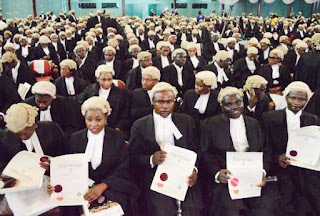 Senior Advocates of Nigeria have supported the call by the Nigerian Bar Association (NBA) President, Abubakar Mahmoud, for the suspension of the judges who were arrested by the DSS.

Mahmoud made the call at the valedictory court session held in honour of Justice Sotonye Denton-West (Rtd).
However, the National Co-ordinator of the Legal Defence and Assistance Project (LEDAP), Chino Obiagwu, condemned the comments of the NBA President.
LEDAP also said the stance by the Senior Advocates, violates the judges’ rights to presumption of innocence.
The group also called on the NBA to focus its efforts on protecting the independence of the judiciary.
Obiagwu said “LEDAP is convinced that the State Security Services acted beyond its powers in searching the premises of the judicial officers and in arresting them, because its enabling statute limits its duties to the detection and prevention of crimes against the internal security of Nigeria.
“It is wrong for the NBA to rely on such illegal and provocative raid and arrest of the judges, and demand that they are suspended pending investigations on the allegations against them. Such suspension of the judges will give cloth of legality to an illegality. The State Security Service has no powers under the National Security Agencies Act or any other law to undertake investigation and prosecution of corruption and economic crimes.
“There is no way the judicial officers who were unduly and unjustifiably molested, embarrassed and intimidated by the SSS are expected to stand down or be suspended because of the illegal raid on them. Rather, LEDAP expects the NBA to be vigorously calling for the arrest and prosecution of the officials of the State Security Services who authorised, or participated in the unlawful attack on the judges.”
The Chief Justice of Nigeria (CJN), Mahmud Mohammed rejected calls by the Nigerian Bar Association (NBA) for the judges arrested by the DSS to be suspended.