Priyanka Chopra and Deepika Padukone are one the top actresses of Bollywood who has come a long way in their respective careers. Be it working with A-list stars to experimenting with different roles or doing women-centric films, both the divas have proved that nothing is impossible for them and they can compete with anyone on the terms of their talent.

Both Priyanka and Deepika are actresses who have not only ruled Bollywood but also showed their talent in Hollywood.

Apart from this, there are many more similarities between these two Bollywood divas which may are not aware of.

Take a look at them here…

First and foremost, both Deepika and Priyanka have made their names in Bollywood on their own terms without any contacts or a godfather. The divas hail from a non-filmy background and earned all the name and fame purely on the basis of their talent and hard work. However, after several failed relationships, both the divas are currently in a happy space with their respective soulmates. While Deepika is happily dating Ranveer for a long time now and is all set to get married. Priyanka has also found her prince charming in American singer Nick Jonas and the duo is reportedly all set to get married. Interestingly, both Deepika and Priyanka’s wedding is set to happen in a gap of two weeks. 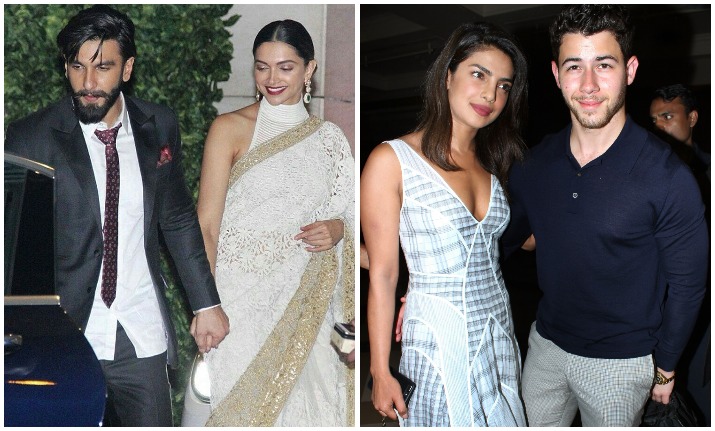 Seems, both the actresses are following each other’s footsteps. After ruling hearts and proving themselves as established actors of Bollywood, both the divas turned their way to Hollywood and conquered it. Yes, While Priyanka has become a Hollywood sensation with her debut American TV series Quantico and then bagged her first film Baywatch, Deepika stepped in Hollywood with The Return of Xander Cage opposite superstar Vin Diesel. Both the divas have been quite popular in the West since then and are making India proud with their achievements.

Both Deepika and Priyanka have been a part of the glamour world for more than a decade and have been linked up with many of their co-stars. Deepika in her early days of career went through many failed relationships with Ranbir Kapoor, Sidharth Mallya, Yuvraj Singh, MS Dhoni among others. On the other hand, Priyanka too has reportedly dated Ranbir, her Anjaana Anjaani co-star, Shahid Kapoor, Harman Baweja among others.

In their long career span, Priyanka and Deepika have worked together just once in a Bollywood flick Bajirao Mastani which was a blockbuster hit. Both the actresses received immense love and appreciation for their roles.

Priyanka and Deepika have truly been an inspiration to many girls out there. Also, they both have a huge fan following on the social media. Well, it will be surprising to see that both the divas were recently close to touching a whopping 25+ million followers on Instagram and are still running in the race to compete with the highest followers.

These similarities are enough to prove that these divas are definitely made for each other, to be precise they are like the soul sisters who end up following the same path which leads to success.