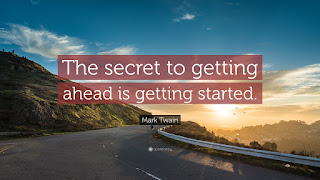 When was the last time you went out for a run, but when you got outside you decided “nevermind”?
My guess is never…
That’s because the hardest part of accomplishing anything is just starting. The hardest part of going for a daily run is just convincing yourself to go out the door! Once you start, you’re going to finish. In business and in life, we’re all struck with ambitions and great ideas. I’d be willing to bet that you’ve had at least 1 business idea in the last year. But somehow, the timing is never right. There are always roadblocks that will stop you from starting your dog-walking empire, or convince you that it’s not the right time to quit your job and travel the world.
And we always seem to look up to the people who are doing this with envy. For some reason, they have something that we don’t, and it’s allowed them a great amount of success. And you know what? I’ve found out what that great “something” is. Do you want to know what it is?

They just get started.

In an entrepreneurial summit in Moscow, Sir Richard Branson is quoted giving this advice: “Screw it, just get on and do it.” Yes, it really does come down to that. Do you think that mega-stars and the world’s best anything are smarter than you? Probably not. They did, however, just make a choice to do something, then they started.
“If you want to summarize the habits of successful people into one phrase, it’s this: successful people start before they feel ready.”
There is no secret sauce. There isn’t a special gene that some people are born with and some aren’t. There is simply the courage to try something new. And you know what? It is going to be scary, and you will fail from time to time.

The Worst Thing That Can Happen?

One of our greatest fears is appearing to be a failure. That’s a pretty bizarre idea. We aren’t afraid of failure half as much as we are afraid of looking like a failure. You’ll be a laughing stock, you’ll have to hang your head and go back to life before you set out to accomplish this thing.
Of course, we all know that life is full of failures and successes, and usually the successes happen after a major failure. That’s because failing is awesome. You’ll learn more from first-hand failure than you ever will from studying or reading. So let’s say you want to start a business, and you have to shut down because you’re losing money. If you start another business, you have this wealth of experience to pull from to ensure that you don’t make the same mistake again!
“Trust me, I never lose. Either I win, or I learn from it.” – Tupac Shakur

The Actual Worst Thing That Can Happen

So if failing isn’t the worst thing that can happen, what is?  If success is a series of failures, then how can we actually fail? If we know that we have to fail again and again to learn how to win, is it possible to actually fail? Yes, it is. There’s only one way to completely fail: to never start.
Whether you’re not starting your first business, or giving up after a failure, the only way to truly fail is to not try at all. When you start, or take any action at all, you’re making progress. Even slow progress is moving in a direction that matters. Don’t stand still, and don’t be afraid to start.

One giant fear that holds people back from starting anything is that they aren’t ready. Let’s take business as an example again. If you’re trying to start an ice cream business, you may think you need all the answers about ice cream, finances, and business management. So you spend all your time learning, and no time doing!  While learning is a great way to be prepared, you won’t actually know what information you need until you need to know.
And the best time to stumble in a business (or any pursuit) is in the beginning. And in the end, you’ll still feel like you don’t know enough. The process of doing anything worthwhile is a perpetual learning cycle, and the sooner you start the better you’ll learn.
The best part is, that once you get started, you’ll realize that nothing is as scary as you thought it’d be. In fact, it’s quite a bit less complicated than you imagined. Business is a matter of logistics. Gaining a great skill is a product of consistent training. There is no secret sauce, you just have to start!